I’ve become obsessed lately with alcohol ink and making stuff with it. If you haven’t heard about it, alcohol ink is an acid-free, quick-drying ink that’s used on non-porous surfaces like glass. I don’t even remember where I first saw a tutorial about it but I’ve had hearts in my eyes ever since. Oh yeah, and you can set it on FIRE too. This is my kind of art project.

And I even had a spot for some art too, There’s a space of blank wall that’s about a foot wide right above my bay window. I’d asked Alex to paint something so I could hang it up there but it’s been about 3 years and all she’s finished is one sad little canvas. Time for Plan B. 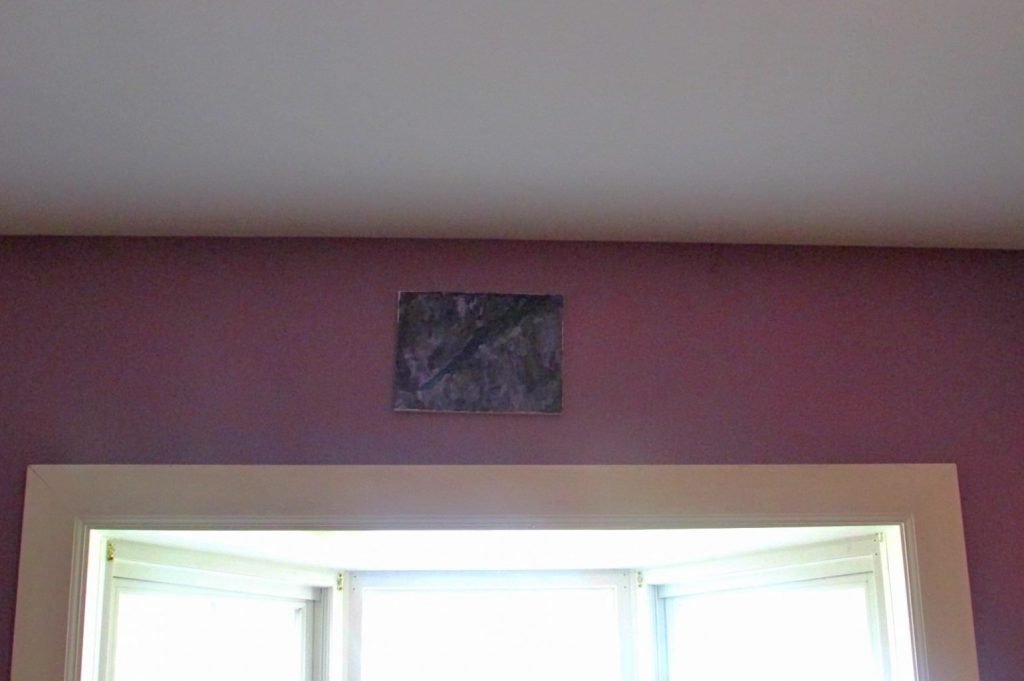 I knew the stars were aligned when I found a long skinny picture at the ReStore for $6. It was one of those times where I passed it and then something clicked and I did the slow back up to look at it again. The frame was the wrong color but I could fix that with spray paint. The “under the sea” theme might have worked for the Little Mermaid but wasn’t doing it for me. All I really needed was the glass anyway.

So before I could even start on setting a fire, er, working with the alcohol ink, I had to prep the frame to get it ready. The back of the frame had a dust cover on it that I had to remove to get to the mat, the picture and the glass.  I saved the cardboard that was behind the picture to use as the back since I wasn’t going to put a dust cover back on. Once I had the dust cover peeled off I could spray paint the frame. I went with white since it was going on the purple feature wall. Alex is never going to let me paint over that wall so I might as well roll with it. My method for spray painting is simple. Put it on a piece of cardboard in the backyard and have at it.

Once the frame was done, I was ready to start playing with the ink! Here are the supplies I used during this part of the project: 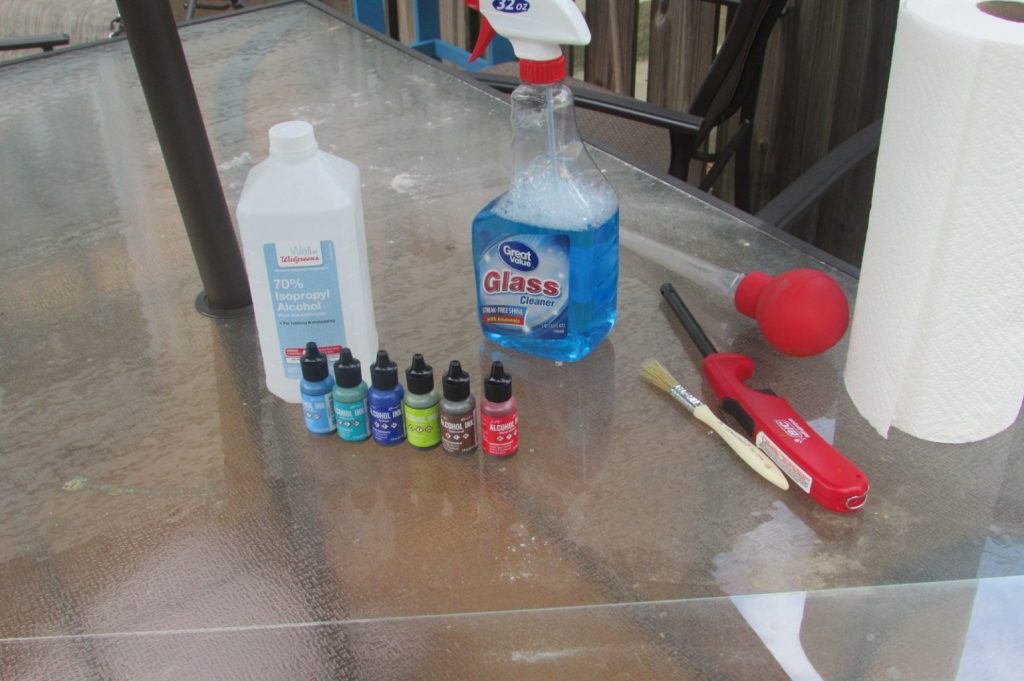 There’s no rhyme or reason, or “right” way to do this. I just started with one color of ink and made droplets over the glass. And then I went to the next color, and the next and so on.

Once I had a pattern that I was happy with, I used the turkey baster to drop the rubbing alcohol around. (And there’s a statement I never thought I’d make). Too much came out at one time so I would recommend getting an eye dropper for more control. The paintbrush came in handy though because I was able to swirl things around a bit and adjust my pattern. 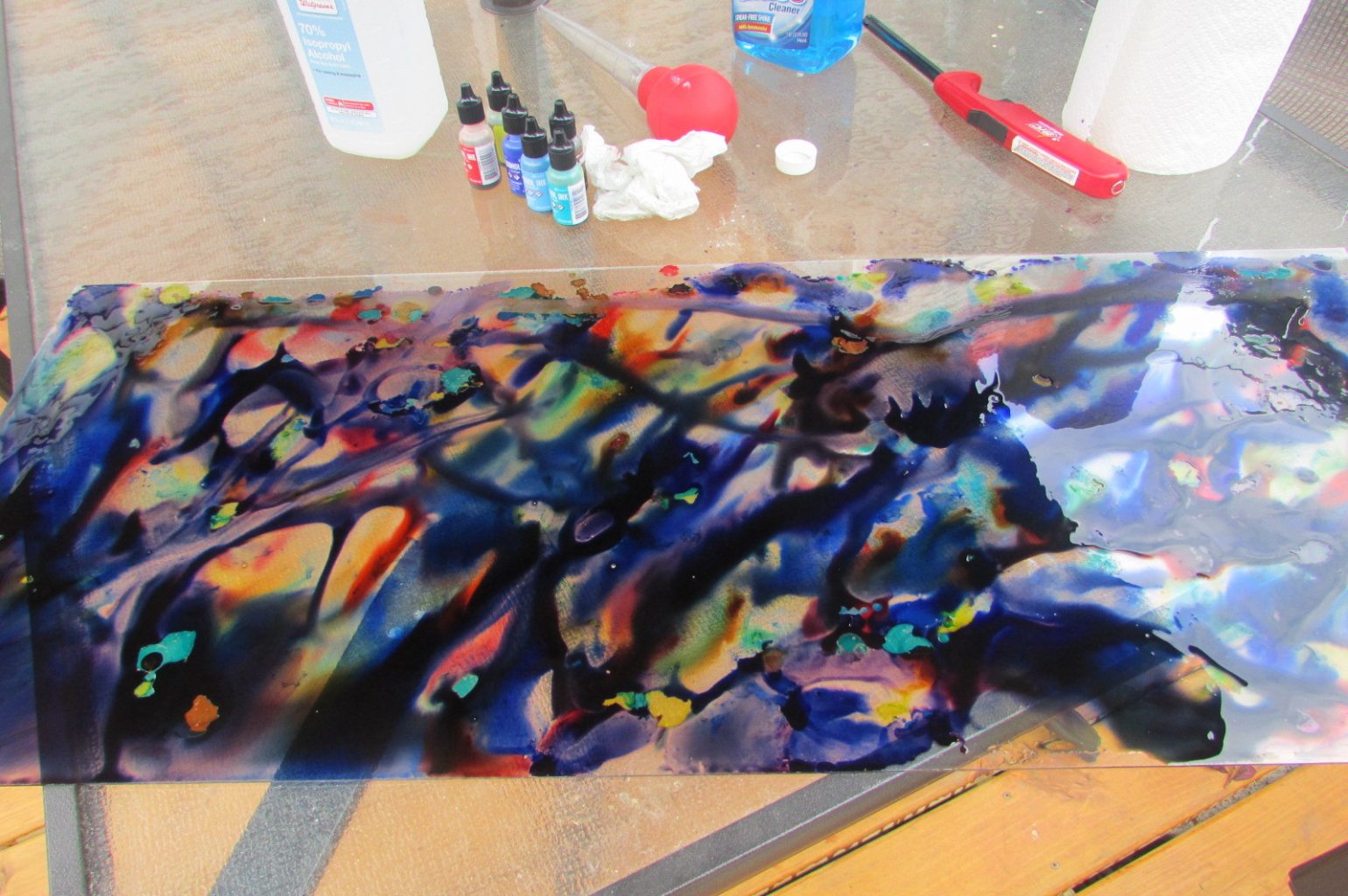 Now it was time for the part I was really looking forward to – setting this baby on fire! Probably you only need to light it in one place but I was having fun playing pyro that day and did it in about 4. The fire will stay contained on the glass as long as you didn’t spill any isopropyl alcohol anywhere else. 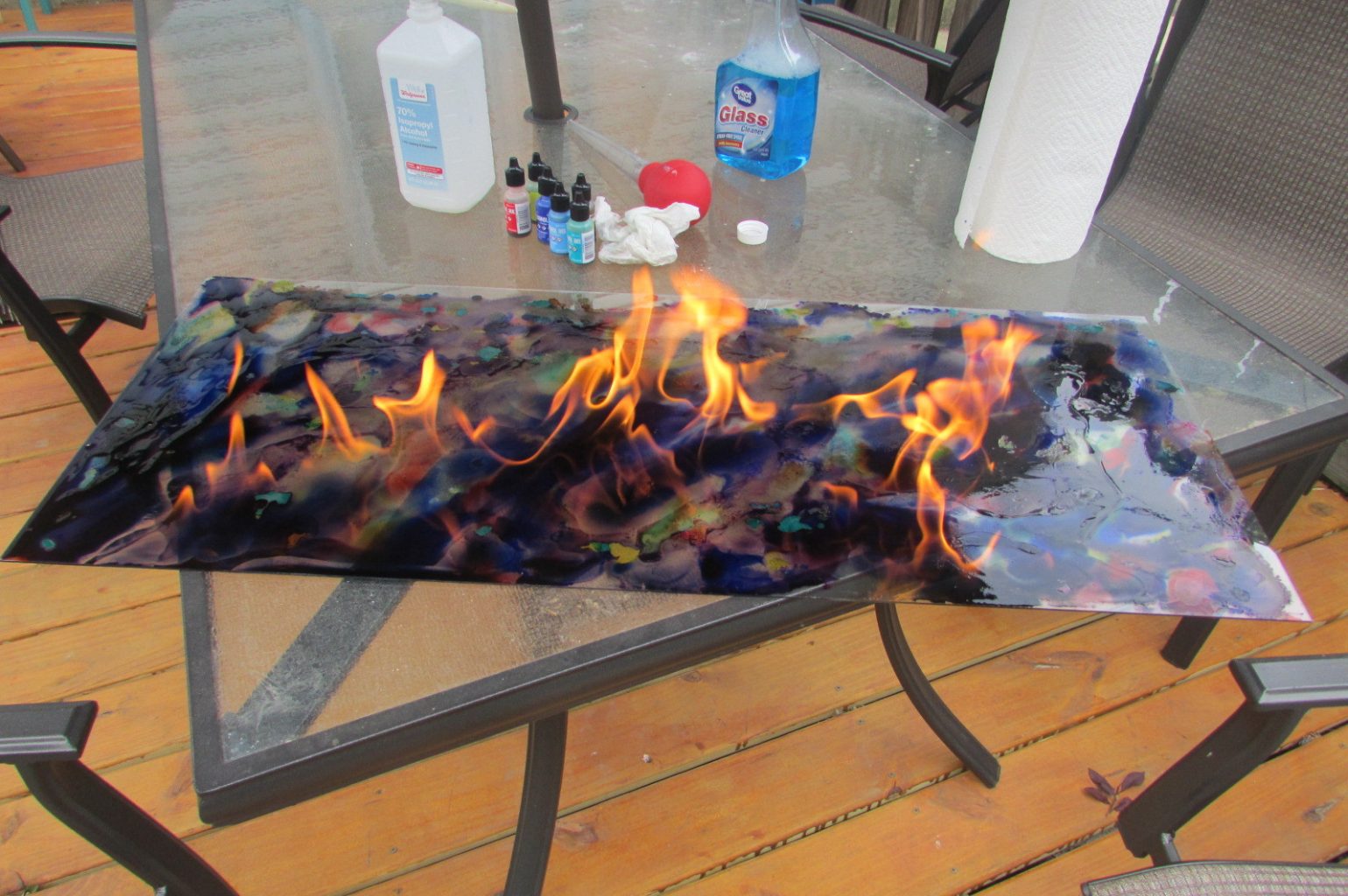 This is what it looked like after the fire died out. I didn’t get the exact pattern or look I wanted at first so I did another round. It dried for about 20 minutes before I put it in the frame because it was still wet in spots. 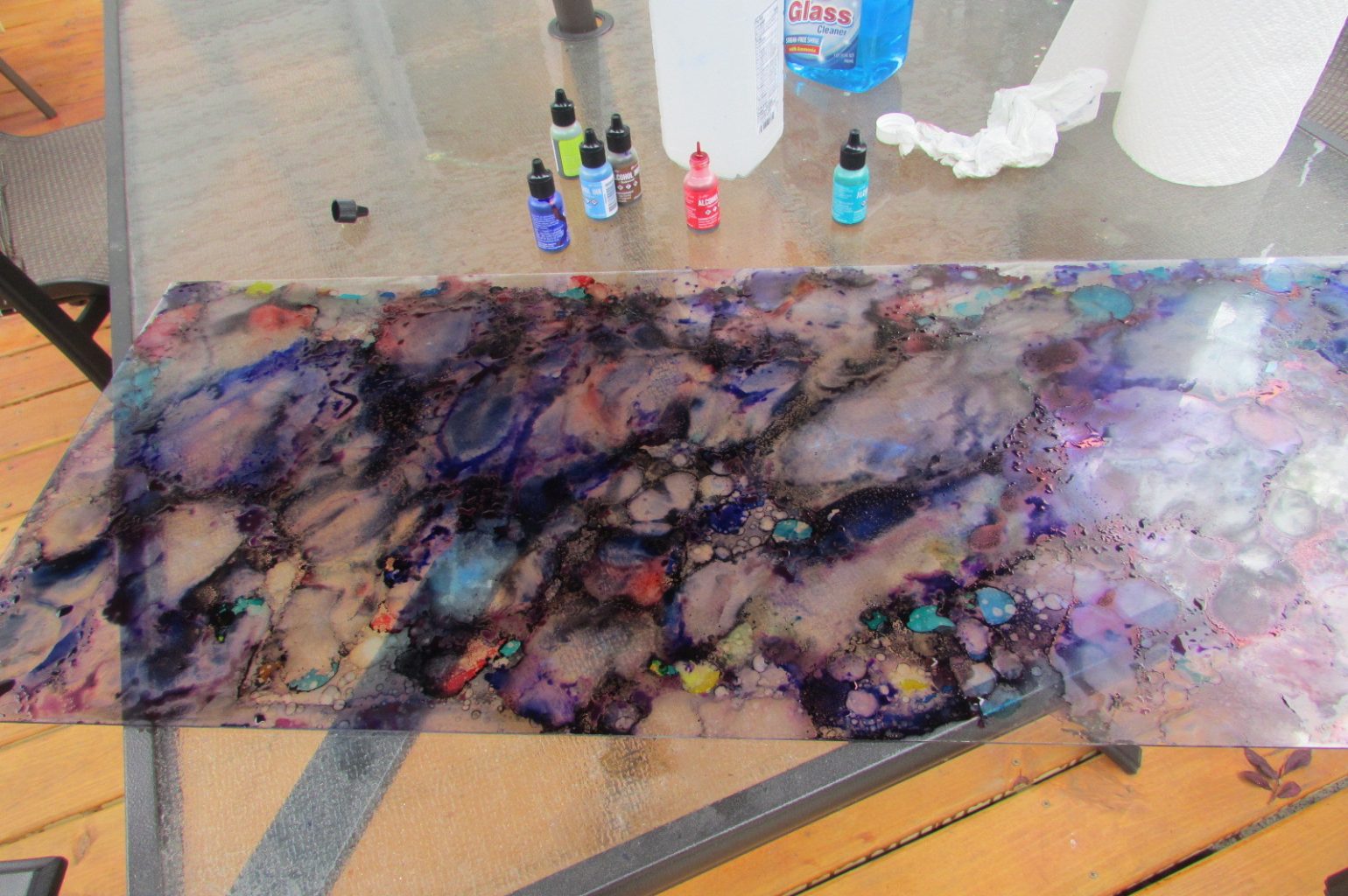 The original picture came with a mat with 3 sections for each of the pictures and I held onto it just in case. I put the glass back in the frame both with and without the mat. I really liked the way it looked with it so that’s what I ended up going with. 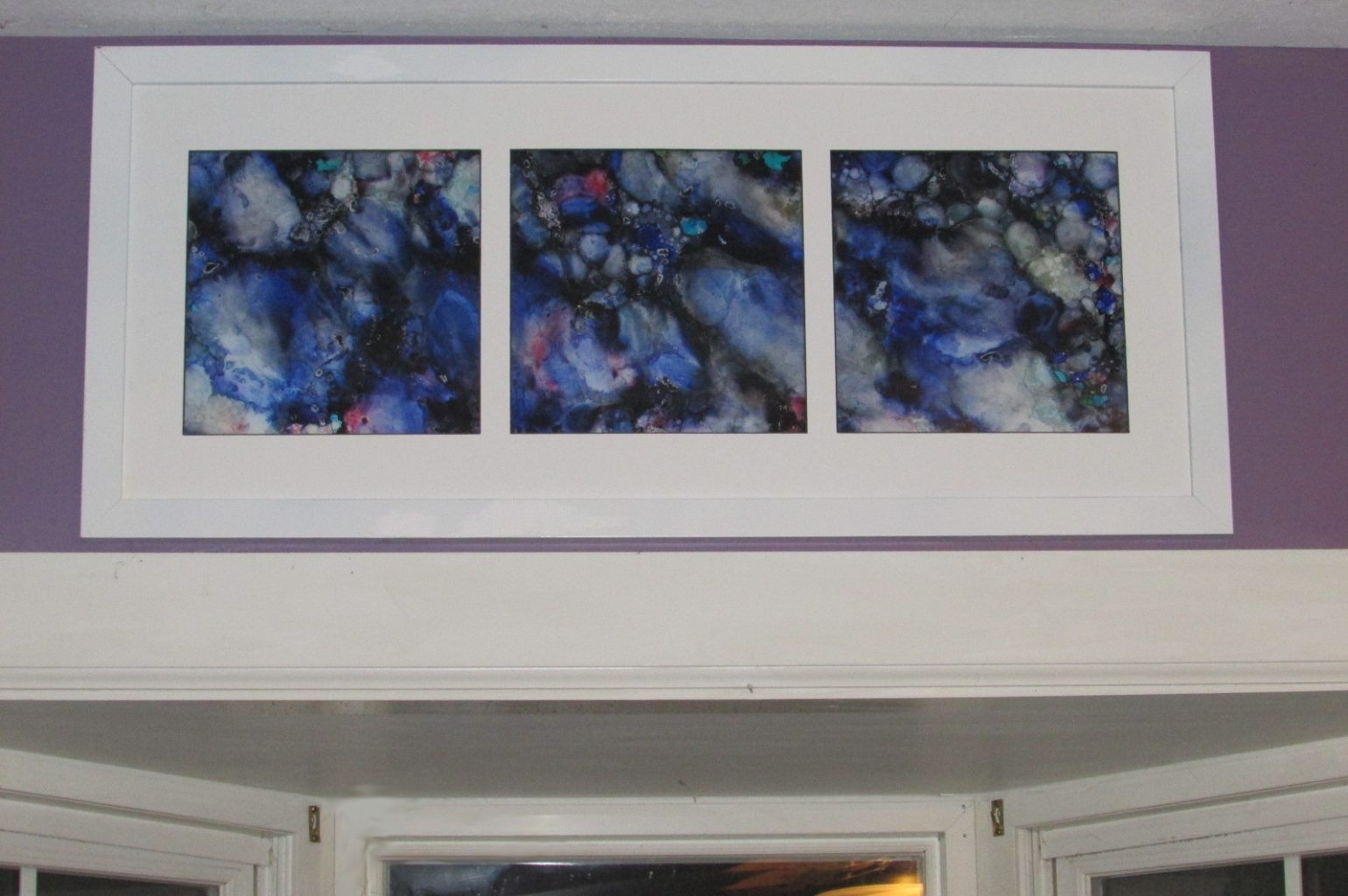 How cool is that? It’s the perfect size to go above that window too. Look at that slightly marbled effect that happens after it’s been burned. It is almost impossible to get a good shot in that room because of the ceiling fan (#yourdaysarenumbered) but this gives you an idea of how it looks after I hung it.

Here’s the budget breakdown if you’re considering trying something like this:

That’s a pretty reasonable price to pay for a piece of one-of-a-kind art. Even if you had to buy everything it would still come in at under $40 and if you buy the alcohol ink on sale it’s even cheaper than that!

This isn’t the first art I’ve made. Check out this post here to see what I made using a piece of scrap 2×4, some yarn, and paint. And you can see here where I used it.

Have you been introduced to the wonders of alcohol ink yet? Let us know in the comments if you’ve done a fun project with it!