You are here: Home / Life & Home / DIY / My Small Bathroom Makeover That Only Took a Weekend!

I had mentioned in my update post a few weeks ago that I had been working on some projects around the house earlier this year.

One of those projects was my downstairs bathroom. Before I bought my house, the first floor had to be remodeled due to a dishwasher fire. The previous owners did a really good job with the paint colors and fixtures they chose in all the rooms. But after living here for a few years I really wanted to make it feel more like my house.

Like most DIY’ers I sort of make my way through the list of projects I want to do, jumping around from room to room sometimes. It hadn’t been all that long since the small bathroom had been redone so it wasn’t high on my list but this year I finally got to it.

While there wasn’t anything particularly wrong with it I wasn’t exactly in love with it either.  It’s an interior room with no windows so zero natural light. The paint color that had been on the walls was a slate blue. The light fixture in there provided a decent amount of light but it still felt dark to me. Here are a couple of before shots so you can see what I was working with. 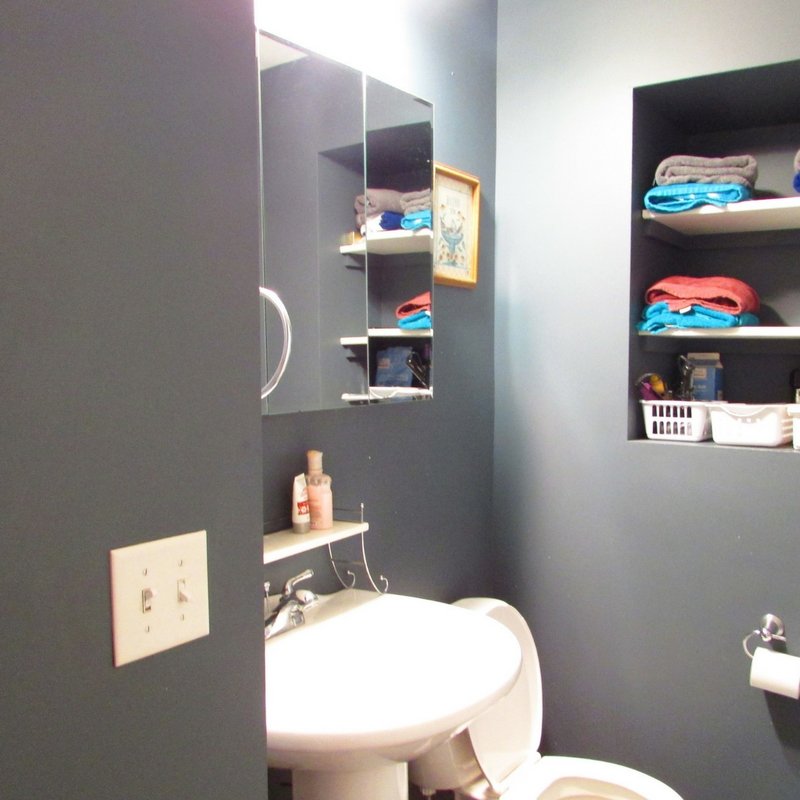 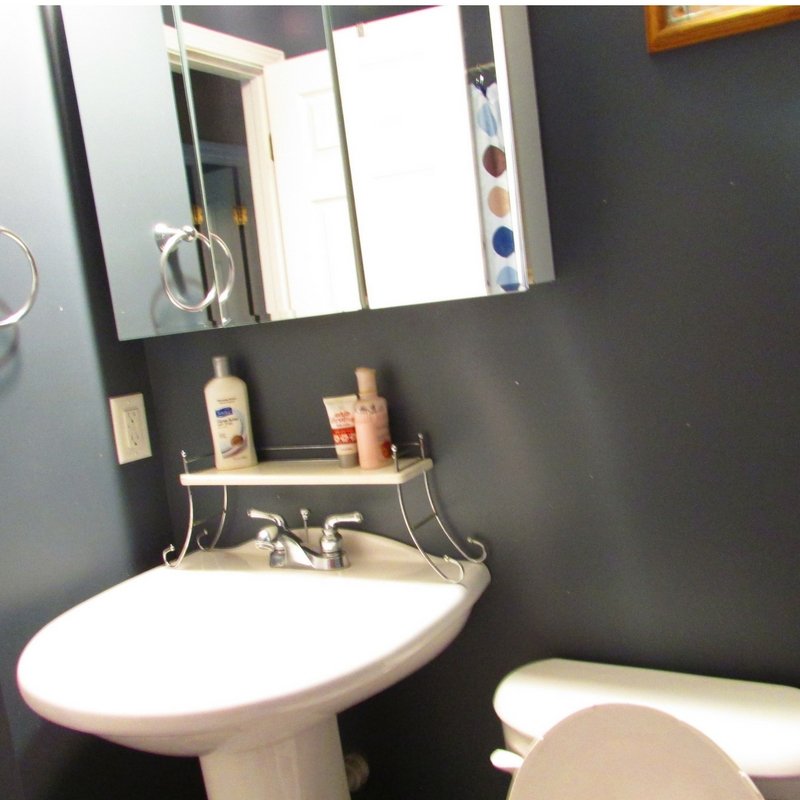 Like I said, there wasn’t anything really wrong with it and I loved the pedestal sink and those built-in shelves! It just needed a facelift. Oh yeah, and something HAD to be done about the grungy grout on the floor. I’d tried to clean it using a bunch of different methods but I just made it worse. So gross. 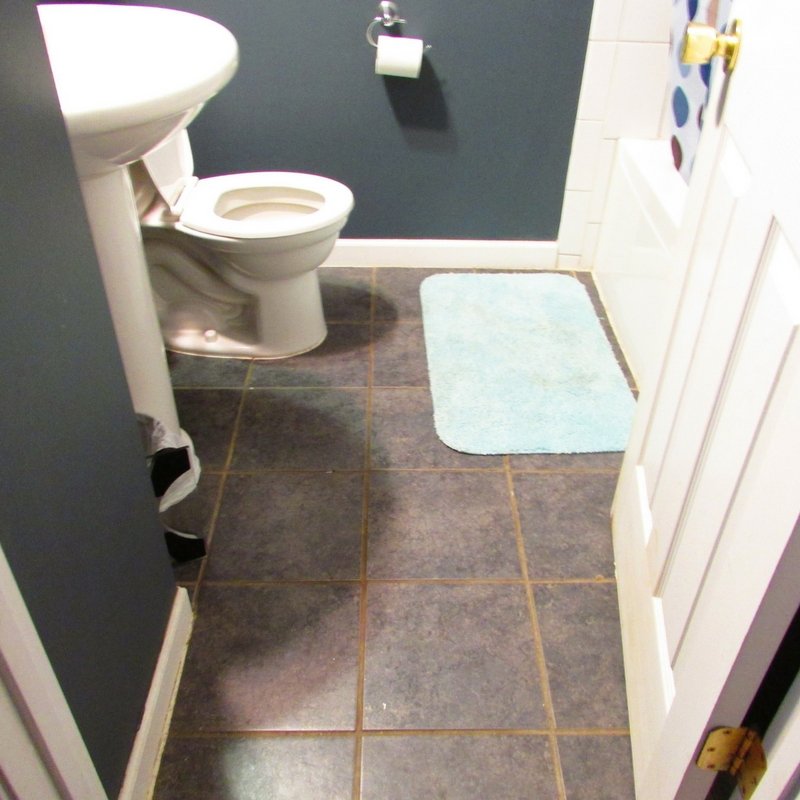 As one does when one is trying to decide what to do, I pinned a butt-ton of inspiration pictures on Pinterest. I really liked the look of board and batten and pinned a few tutorials where they “faked” it. So step one was figuring out how to get that done in my space. The issue I was going to run into was how to get behind the toilet and the sink. The toilet tank was easy enough; I just removed it. The sink was a little trickier because it was bolted to the wall.

This is literally the only “progress” shot I remembered to take during the whole thing but you can see where I was starting to lay out the strips for the batten in the corner. 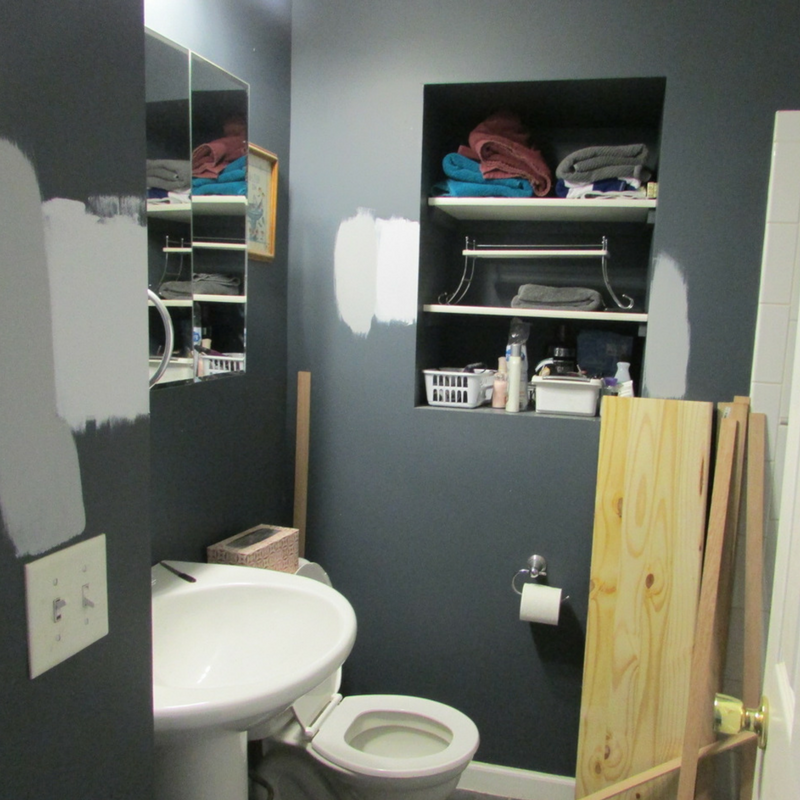 I decided I wanted the thin strips I was using for the batten to be 36 inches long. That would put them about 6 inches below that bottom built-in and above the faucet for the sink. I couldn’t find true “batten” when I was looking at Lowe’s but I found these 1/2 in by 2 in pine boards that fit perfectly on top of the baseboard (after I decided to upgrade the baseboard).

I didn’t have a nail gun when I did this, which sucked. Man, do I ever wish I’d had this cordless nailer/stapler combo though. No air compressor needed! Just batteries!

I also needed to decide on a paint color for the upper walls. I’ve repainted a few rooms over this past year and most of the paint colors have been in the blue/green/grey family. I’d chosen a pretty light blue for the laundry room and in the dining room, Sea Salt by Sherwin Williams, which might just be my favorite paint color ever. The small bathroom is just off the hallway which leads to the office, laundry, and the dining room so I wanted to pick something that was complimentary. I ended up with Online by Sherwin Williams. It has some blue undertones and plays really well with the surrounding rooms.

And here is how it all turned out! 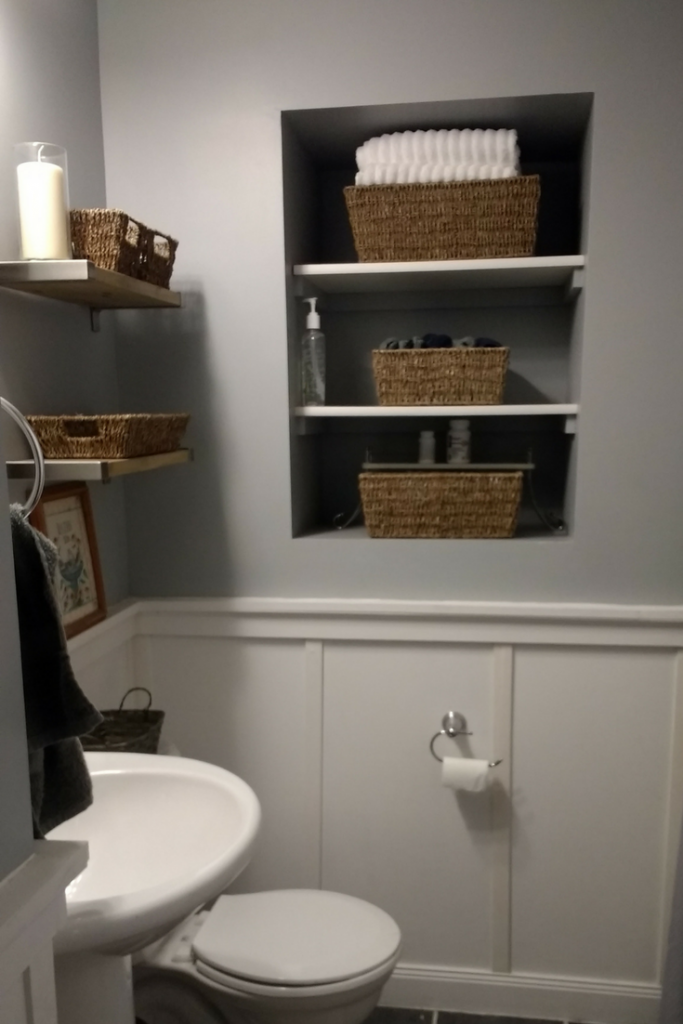 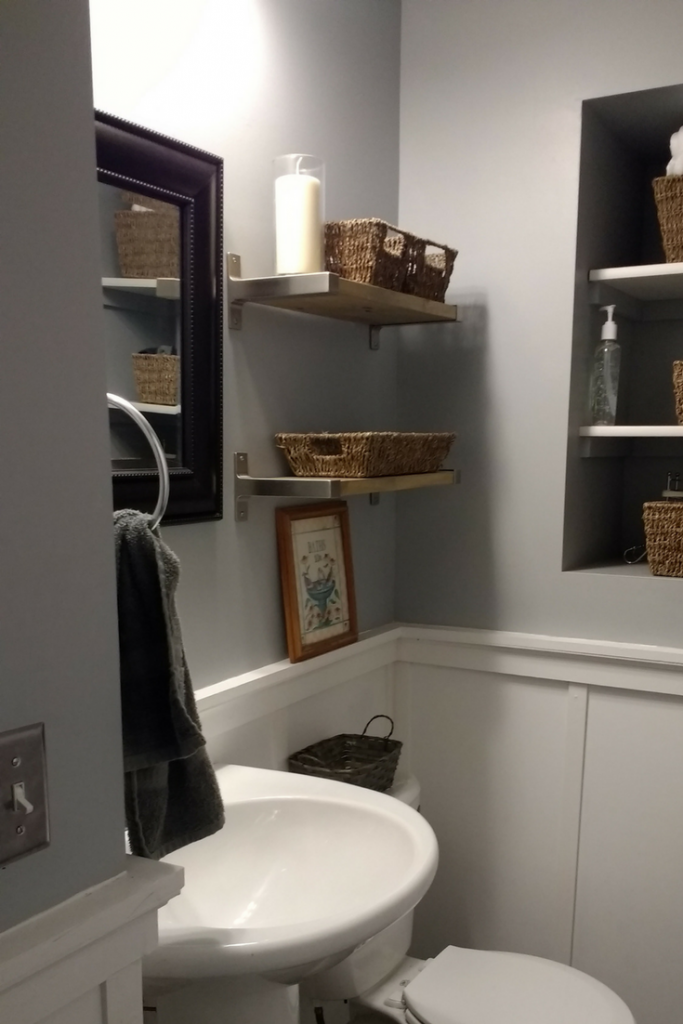 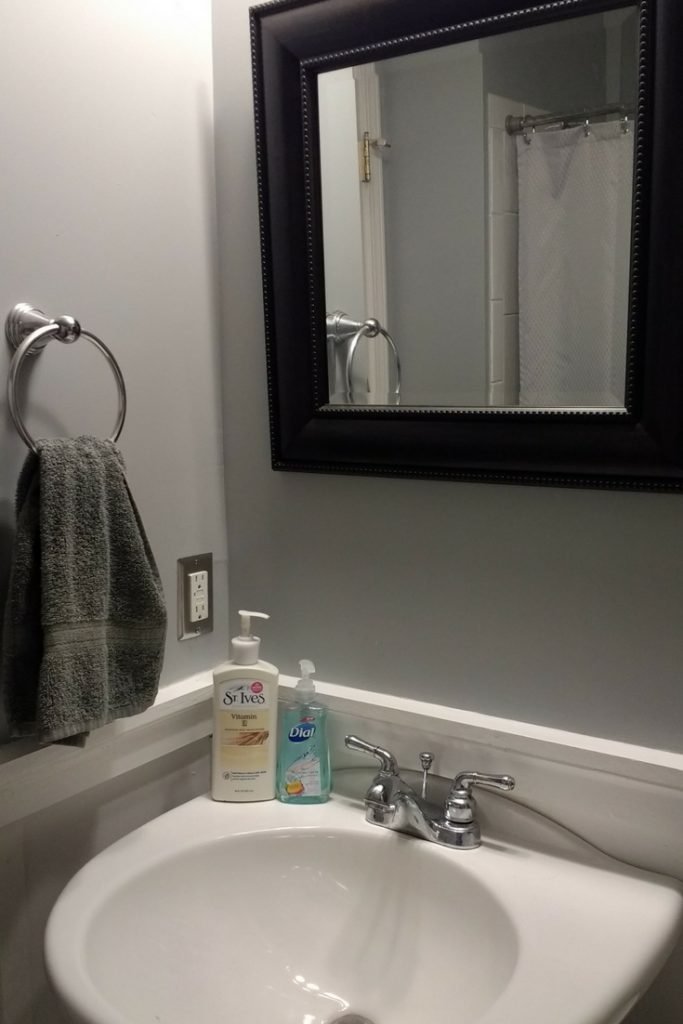 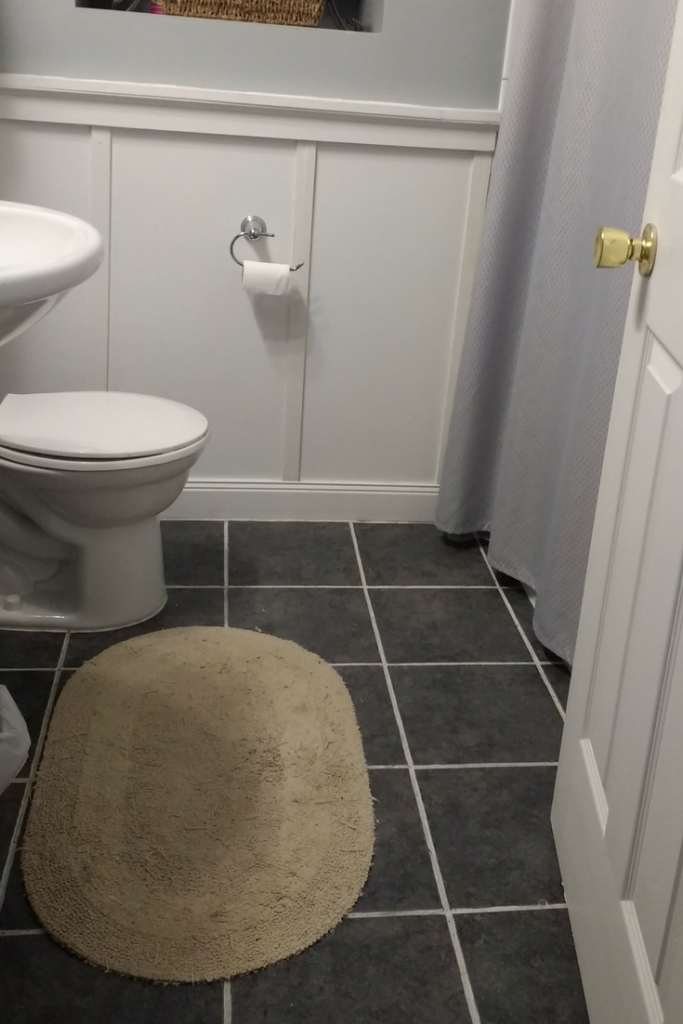 That Grout Is Clean!

Look at the clean grout! I found a product that is part paint/part grout sealer. I applied it with a small craft brush and let it dry for a couple of hours. The directions say to use a q-tip but I had better luck with the small brush. That’s it! After all the time I spent scrubbing that floor and…it was that easy. It’s been about 6 months and it’s holding up great. I’m glad it was a small bathroom though.

I really wasn’t a fan of the 3 mirror medicine cabinet that had been there before so I removed it and hung this cute mirror instead. I don’t miss having the storage because there’s a small closet in the hall that I use for everything that used to be in there. And this is the guest bathroom anyway, so not as much storage is needed since it’s not used all the time.

Plus I added 2 new shelves above the toilet too. The shelf brackets are Ekby Bjarnum from Ikea. The brackets are designed to fit a 1-inch thick shelf. Typical lumber comes in nominal sizes which means that it’s more like 3/4 inch instead of a true 1 inch. However, stair treads are exactly 1 inch thick. I purchased a 4-ft tread from Lowe’s and got 2 shelves out of it. The stain on the shelves is Weathered Oak stain from Minwax.

Can we talk about those baskets for a minute?

They’re seagrass baskets that I got from The Lucky Clover Trading Company. They’re a wholesaler but will sell to the public for a small upcharge if your total is under $50.00. I love baskets so much that I usually don’t have to worry about the upcharge. ?

I’ve also swapped out the plastic outlet and light covers for stainless steel in each room that I’ve done so far. I like the look better than plain white and I think it makes my awesome paint colors pop even more.

I am thrilled with the way it turned out! I’m not sure what my favorite part is because I love it all. Every time I walk in here I get all smiley. In just one weekend I was able to get it done so it really goes to show what a coat of paint can do.

Let us know in the comments what you think of this small bathroom makeover!