You are here: Home / Life & Home / DIY / How to Build a Desk Using Cabinet Bases 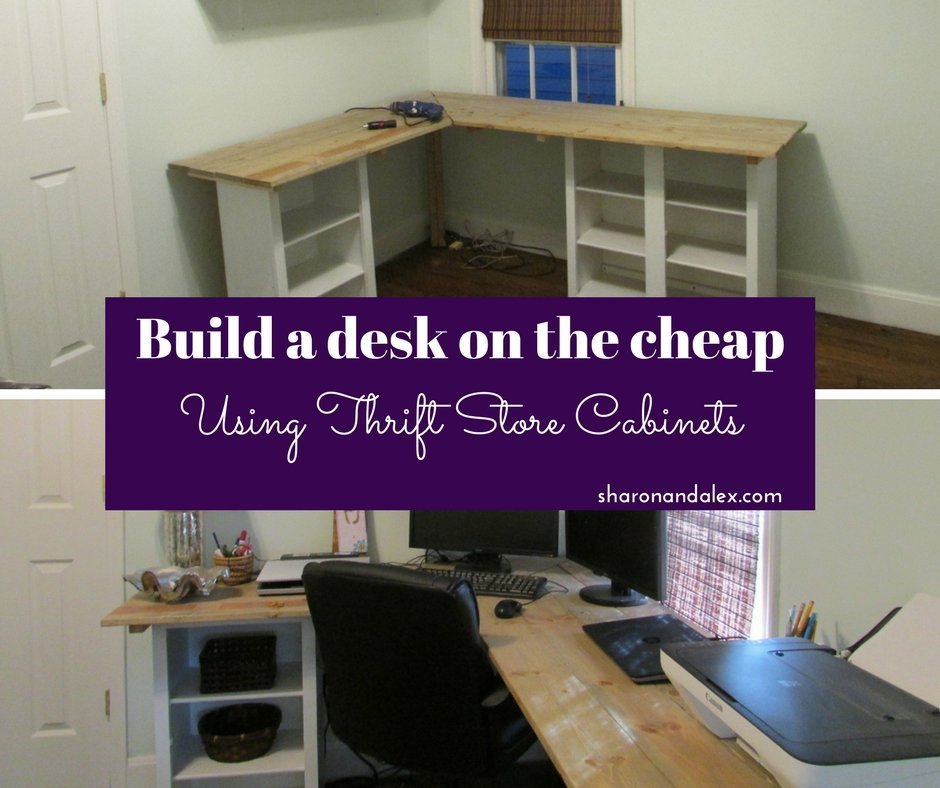 And we’re back for the next post on my recent office redo! The last task (and most fun part, in my opinion) was to create an awesome work area where I’d have plenty of room to spread out my stuff. I’d mentioned in a previous post about how Alex and I had wrangled a couple of cabinets I’d found into my Camaro. I really wanted to build a desk using cabinet bases and wouldn’t you know, I just happened to have a couple in the garage. Originally I thought I’d use them to create some built-ins for the dining area but since they came with no doors I thought they’d work better in the office. At only $5 a pop, the price was definitely right.

I needed to figure out what to do about a top but first things first, the cabinets needed a little love. Here’s a pic I snapped mid-texture removal so pardon the mess. The other cabinet was just a single but it matched. They weren’t together at the ReStore but I spotted this first and then found the other one when I was walking around. It was fate, what can I say? 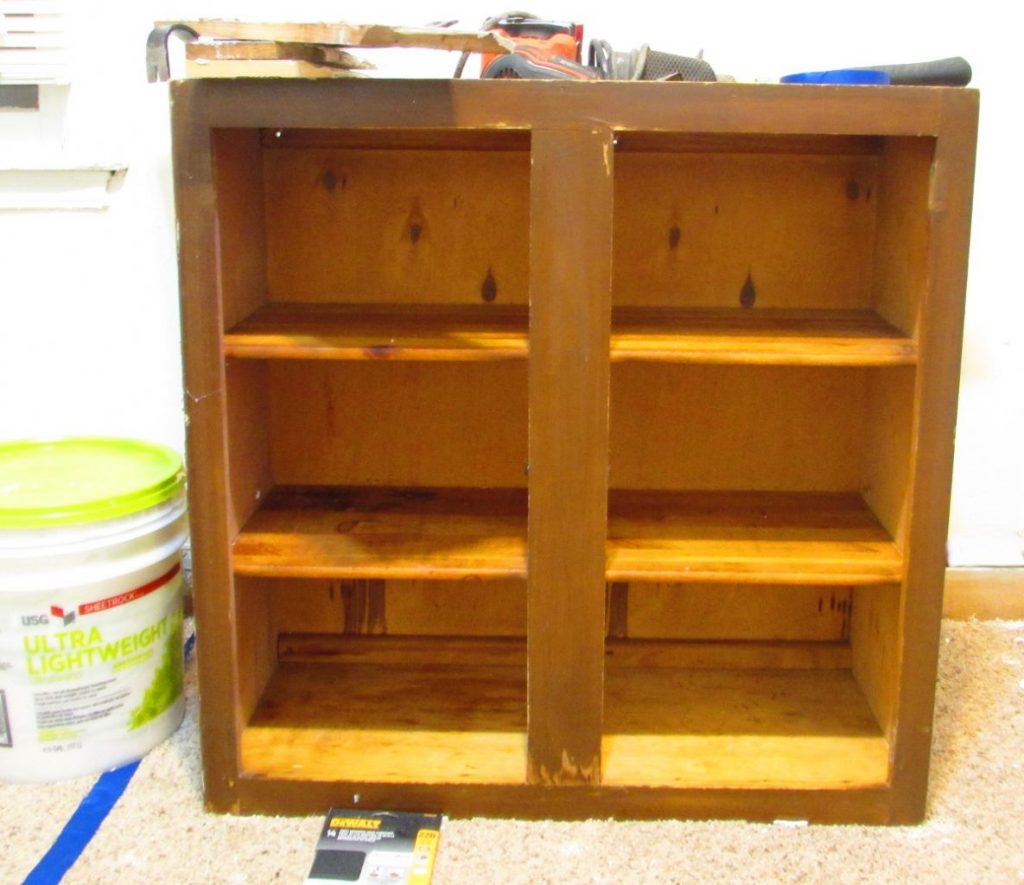 For some reason, I didn’t take any pictures during the sanding/priming/painting process. I guess I’ll have to rely on my words to describe it…ha!

Really, I just sanded both cabinets a few times with an increasingly finer grit, similar to the process I used on the floor. This is the sander that I use and I love it!

After wiping it all down with a damp cloth to remove dust, I gave them 2 coats of primer. I always use Kilz oil based primer on furniture. It’s easy to apply even if it is a little messy to clean up since it’s oil based.

Once the primer was dry I gave them 2 coats of white paint. I’ve really been liking Olympic paint lately so I used Olympic ONE semi-gloss Base 1/Ultra White paint.

I was undecided about what to do about doors or even if I wanted any so I left them alone for the time being.

Next up was the top of the desk. The final design was a corner desk because it would allow me to maximize the space more fully. I hit up Google and Pinterest looking for inspiration. I was thisclose to using plywood like in this plan from Ana White. At the last minute, I changed my mind and went with a plank top instead. Cue Bobby Brown’s “My Prerogative”. Because of the location of the desk, one side was going to be longer than the other so it was really more of an L. One side was going to be 7ft and the shorter side needed to be around 5ft.

Another internal debate I had going on was about the width of the desk. If you ask Google what the standard width of a desk should be, you’ll find that between 20 and 30 inches wide is the ideal size. I didn’t want it so wide that I had difficulty reaching the back. Then again, it needed to be big enough to comfortably fit my stuff. The cabinet bases were only 12 inches deep so that was a consideration too. Decisions, decisions!

Now I had to decide how to put the top together. The office sits off a small hallway. It’s difficult to get furniture in and out of that room because the bathroom is directly across and the laundry room is off to the left. Plus the wall of the closet is to the immediate left once you’re in the office. A 5×7 shaped top was not going to fit through the door so it was going to have to be built in 2 pieces in a way that made it easy to connect once in place.

I’d decided to cut the edges at a 45-degree angle to form the corner which required me to do more math than I care to do on a weekend. I laid them out on the garage floor to see if the size was going to work. 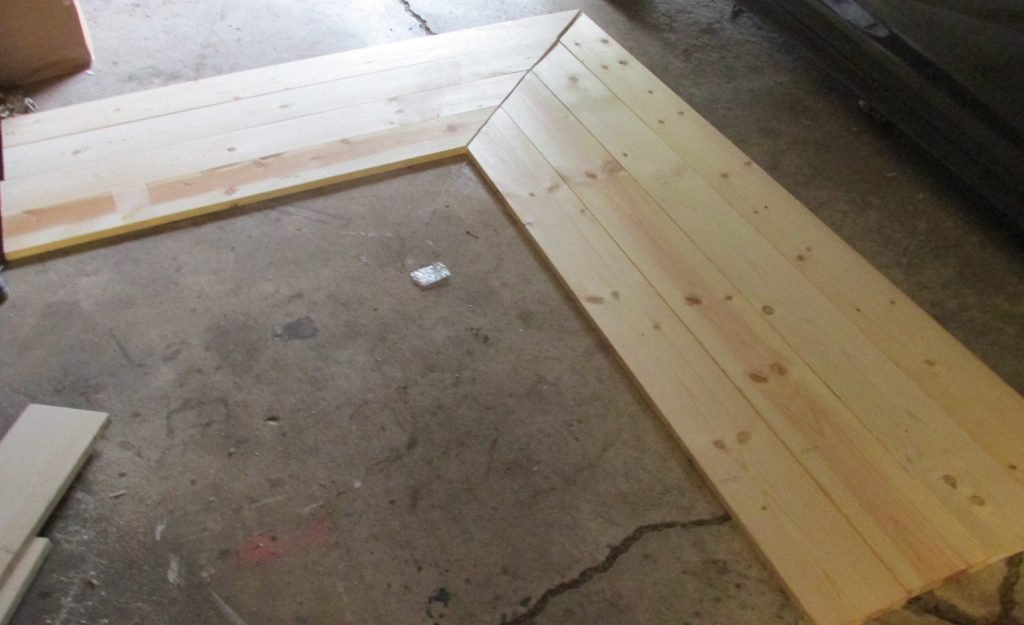 Next came the fun part of figuring out how to fit it together. I should mention that I meant to pick up some 1×2 boards to use on the bottom. Yeah, so I got all the way home before I remembered. Luckily I had some 2×2 pieces left over from a previous project so that’s what I used. The spacing below is to accommodate the width of the cabinets. I wanted a piece on each side of the cabinet for extra support. I screwed 2 2×4’s together for the leg and placed one on each side of the corner. I thought that would be enough support since there wasn’t a cabinet there.

The tricky part was coming up with a way to connect the 2 sides in the middle. After a little thought, I used a scrap piece that was wide enough to span both sides. I measured and pre-drilled the holes to make it easier to attach once it was inside. I seriously felt like MacGyver during this part because I was figuring it out as I went, using what I had on hand. 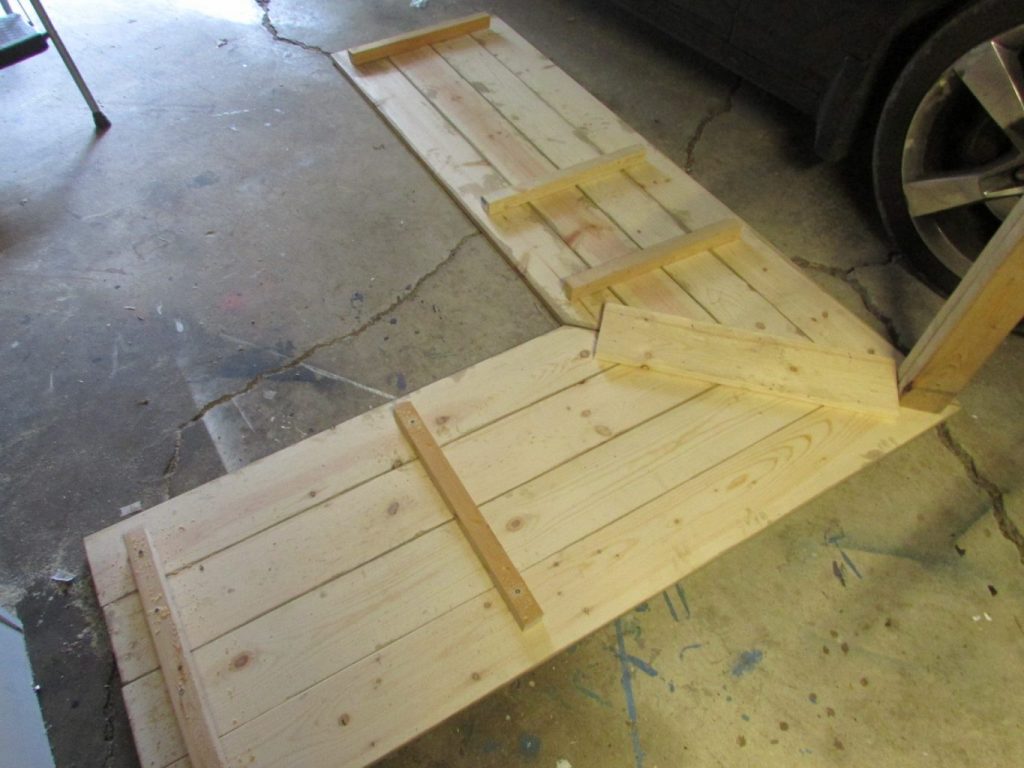 It was easier than I thought to get everything attached once inside. Woohoo! It was just a matter of screwing into the pre-drilled holes and lining it up over the cabinets.

The shelves went up next and as you can see, the spacing was totally off but that was fixed later.

I had decided to stain the top once it was in place instead of doing it first. I really thought it was going be tougher to attach everything so I didn’t want to risk damaging anything. Once it was attached and nice and sturdy, I stained it using Weathered Oak by Minwax. I had that on hand because I liked the color but hadn’t found a use for it. Until now! A lighter color looked better on the desk with the darker color on the floor. Plus I’d gone with a darker color for the blinds too. 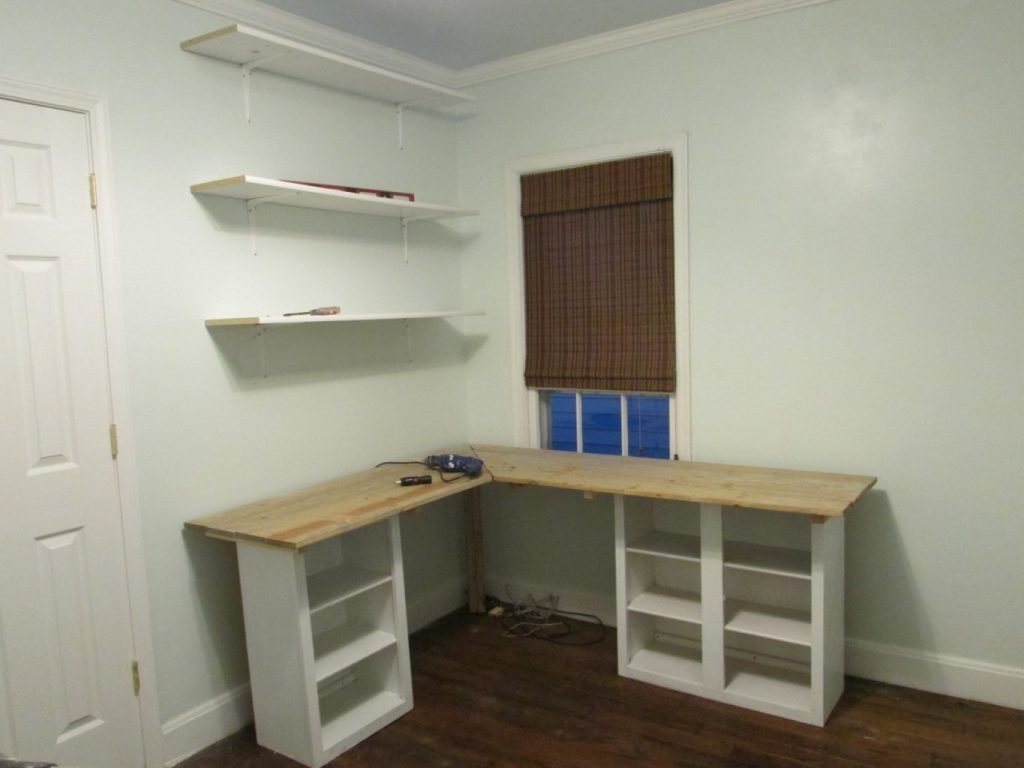 My mom actually gave me the idea for what to do about the door situation. She suggested using baskets for storage and I’m 100% on board the basket train! I haven’t bought them yet but it’s on the to-do list. Go, Mom!

This space turned out better than I could have possibly dreamed. It’s the perfect width for all of my equipment. I work from home a couple of days a week so I had to have room for an extra laptop and big ole monitors. I love my work from home days and imagine I’ll be spending some serious quality time in this room. It’s so cozy in here. I’d been stockpiling decor items for a while now and it felt great to finally be able to get them out.

See my Rosie the Riveter poster? I snagged that at one of our fall festival/craft fairs and have been DYING to hang it up. Of course, I’ve been DYING to just have the freakin’ walls done in here too. 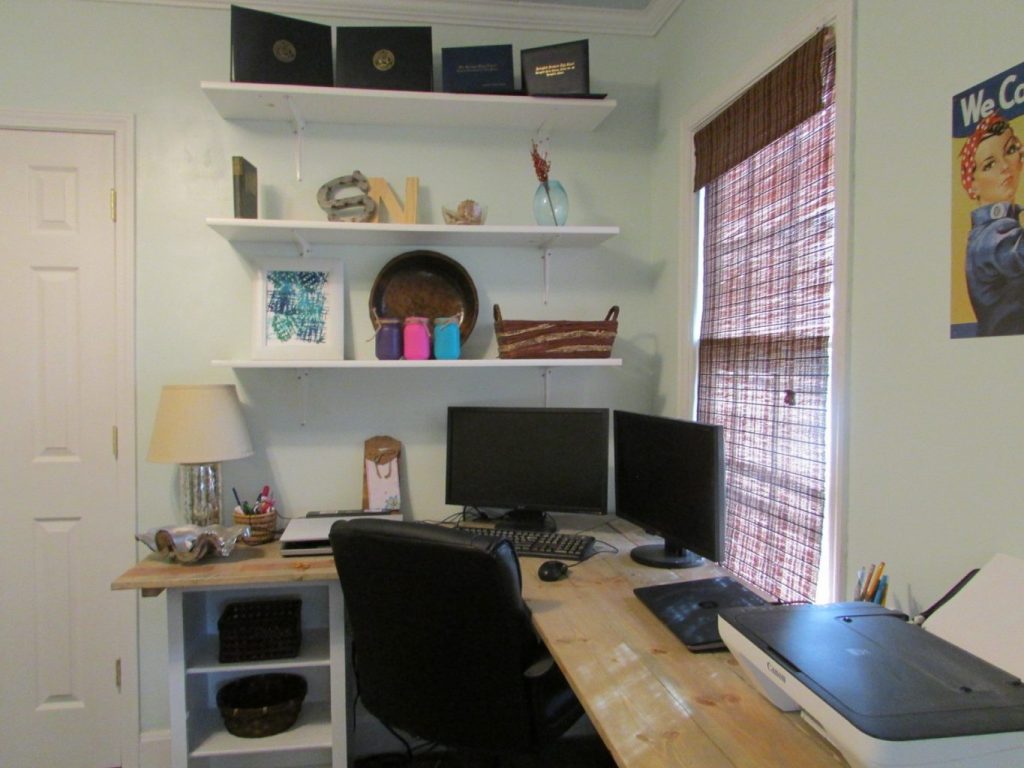 So there you have it – my DIY, on the cheap, awesome workspace.

In a future post, I’ll show you the (still almost) finished space. I just have a few little tasks left, like new outlet and light switch covers! Which is so simple but for some reason I’ve been putting it off. I think it’s Lowe’s overload maybe.

And in case you missed it, here are the previous posts on Project New Office in one handy spot for you.

Previous Post: « Refinish Wood Floors…The Hard Way and Without a Big Sander
Next Post: And so it ends…my new office reveal!! »